“Let me tell you what I think of bicycling. I think it has done more to emancipate women than anything else in the world. It gives women a feeling of freedom and self-reliance. I stand and rejoice every time I see a woman ride by on a wheel…the picture of free, untrammeled womanhood.” 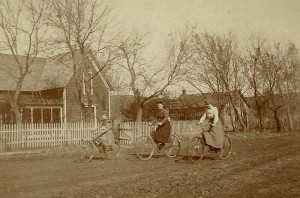 Such as was declared in the 19th century, by the North American suffragist, Susan B. Anthony, who had also traveled on bicycle, this vehicle had been one of the symbols of the women empowerment during this age.

This fact had not only taken place in the United States, it also happened in a lot of other places around the world. A similar case is Great Britain, which has been thoroughly documented by Dr. Sheila Hanlon.

Because it is during this century when the bicycle became a bold element which started a lot of debates: a woman could go from one place to another without the necessity of being accompanied by a man; the image of a physically weak woman was demolished; some clothes became uncomfortable for being used on the bicycle… some little changes which revolutionized a lot of aspects and won against the ridiculous theories, such as some of them the emerged from the medical sector, from where they alerted physical damage such as the sterilization or the abortion. A useless attempt for trying to control women.

Although the evolution is obvious in a lot of countries, nowadays we still have a lot of work and tours to do. On this International Woman’s Day, we want to keep going this way with all the women on this historical symbol, the bicycle.