If nothing is written about taste, Barcelona is a city which gathers the major part of it with its parks, museums, markets, monuments… even its streets are different from district to district and in each one we can find a piece of history.

Ten are the districts of Barcelona and in each one we find the neighborhoods and the communities which bring them to life. Starting with Ciutat Vella, where we can imagine ourselves through its narrow streets through the same corners where the first city’s activities were originated. Markets, cathedrals, restaurants, the port, the beach, its passages and its people are the elements which configure the landscape and the neighborhood.

Bordering the sea, on the right of Ciutat Vella, we will find Sant Martí, one of the biggest districts. Here, apart from the conglomerate of offices which form the 22@ zone led by the Agbar Tower, we can find the major part of the beaches of Barcelona; the calm neighborhoods of Poble Nou and Clot; in addition to the impressive Fòrum. 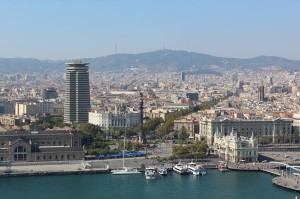 On the other side, we have the left hand of Ciutat Vella, where we can go from the sea to the mountain of Montjuïc. But, of course, to do this route we have to go through the streets of Sants, where it is always a good plan stopping there and having something to eat and drink. And which is the street separating Ciutat Vella from Sants-Montjuïc? The Paral·lel Avenue, the center of performances par excellence. A fame which has cost a lot of years of work for all the theaters situated on this street.

Over Ciutat Vella we will find the Eixample, where, far from its squared appearance, we will find the figures of the Casa Batlló and La Pedrera with their exuberant shapes; in addition to the Casa de les Punxes, the Palau Baró de Quadras, la Casa Ametller, la Fundació Antoni Tàpies and, of course, the endless Sagrada Familia.

And if we continue ahead we will find, from the left to the right, Les Corts, Sarrià-Sant Gervasi, the bohemian and, at the same time, gipsy Gràcia, Horta-Guinardó, Nou Barris and Sant Andreu, districts which, as residential zones, contain the soul of the communities that live there. Each one does this in its own way, especially with their celebrations and activities, that are a sample of the people which build Barcelona.

So, remember that in order to experience Barcelona on your trips, you should not forget any one of the details that bring the neighborhoods, and finally the city, to life.