Last weekend, we were overwhelmed by the news about the death of Muriel Casals, ex-president of the Omnium Cultural organization and member of the Catalan Parliament in Junts pel Sí party, who was run over accidentally by a bicycle in the center of Barcelona.

A terrible piece of news, the cause of which we don’t want to be a reason for decreasing the spirit of everybody who works to achieve that the bicycle will get to be one of the more used means of transport (even the most used one) in the cities. This is due to the fact that we think this kind of accident can be reduced to 0, because the bicycle is a healthy means of transport and can also be safe. But this can be only achieved if we work together.

Far from repeating, as we have done other times, the advantages of the bicycle’s daily use or the safety tips again, we want to share this fragment from the note written by the Assamblea Catalana d’Entitats de la Bicicleta (Catalan Assembly of the Bicycle Entities), “Dels ciclistes en memòria de Muriel Casals” (“From the cyclists in memory of Muriel Casals”), with which we feel very identified.

“And it is because we love life, actively, involving ourselves in it every day with our personal habits of mobility, that when this ingenious and simple machine, which is the bicycle, our tool to fight for a better life, ends up causing a shortening of a life by a wretched and unfortunate circumstance, it is inevitable for us to intensely and deeply feel the sorrow and the mourning”.

Only through everyone’s solidarity and sense of responsibility will we achieve a better city.

Surely on the return of this holiday you are more motivated and you want to get fit again, and if you aren’t, you are still on time. See how:

Last week we reminded you that weekends are perfect for carrying out different activities in nearby places, taking advantage of the bicycle flexibility and that it can result inexpensive. This is a good way to do exercise and there are a lot of other ones at different moments of the day without costing neither money nor time. Our favourite one: going through the city on bicycle, especially if you live in a city such as Barcelona.

Pedal one hour every day. And don’t think that one hour is too much! Only with the daily journeys we are sure that you will not have any problems to achieve that. Think about the time that you spend in the car or on the motorbike going to work, picking up your children, going to meet your friends… Pedalling you will contribute to improving your cardiovascular system; to strengthening your muscles, including the muscles of your back, which, surely, this first week of work, are crying out for this; and to achieve a general well-being, in the sense that the physical exercise means that our body secretes hormones, endorphins and serotonins, which surely help us fight against the post-vacation depression.

How to achieve that: 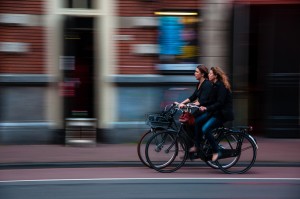 It’s possible that the first days you will have problems with starting. Because of that we advise you to call some friend who practices this exercise regularly or who is as motivated as you to start with this. You can meet at some place on the way to work and encourage each other.

Calculate the right time of the route to your work. Try not to pedal by racing on your first day and arrive slovenly. And keep calm. This time will reduce once you get used to going by bicycle and controlling the route in a more efficient way. Take a replacement t-shirt with you. It doesn’t take up too much space and until the winter arrives  you will be grateful.

With a little bit of will power in a few days you will see the benefits for yourself.