Very common in Barcelona, street art is still growing. “Street art” means Urban Art, it is a contemporary artistic movement that appeared at the end of the XXth Century. It is present in the streets, on the walls, in public places. It comes in different forms: graffiti, poster creation, stencil graffiti, pastel and video projection.

If you want to discover street art, Barcelona is for you! In this article we present you the 5 graffiti not to be missed, but you should know that there are some on almost every street corner !

The Carboneria of Sant Antoni : a place full of history

The old abandoned coal factory is now transformed into a squat. It is one of the spaces where we find the most street art. Long threatened with demolition, the coal factory is now one of the most emblematic places of street art. Indeed, the *okupas have made a fresco on the facade of the charcoal house, making it of historical and artistic interest and avoiding its demolition.

*People who occupy and take possession of unoccupied places to live in.

The face of Rosalia : the Barcelona pop star

Originally from Barcelona, Rosalia has been known worldwide since 2018 thanks to her songs and duets with international stars. Supported by the citizens of her hometown, the Catalan singer has been represented on the walls of the city by the famous artist Uriginal, in the district of Sants to immortalize the face of the new voice of flamenco!

El Pez : an explosion of colors

Renowned worldwide, the Barcelona artist is one of the greatest figures of street art. He has created works all over the world: Barcelona, Lyon, Paris, Oslo, Miami, Bogota, etc. His works are easily recognizable because he always represents smiling fish with bright colors.

Pablo Picasso : youth has no age

Portrait of Pablo Picasso by #myhoodisgood with the phrase “youth has no age.” This phrase is dedicated to Picasso’s adolescence and early adulthood in Barcelona, where he met his lifelong friends. It also expresses the youthful spirit of the famous painter who died in 1973.

This work is a tribute to Juan Andres Benitez, who died in 2013 during an altercation with the police that degenerated in the Raval neighborhood. Several artists wanted to honor his memory by telling his story through street art. This place is called the Agora and is a space for meetings and exchanges.

Don’t hesitate, come and discover the street art in Barcelone !

To see more, here are the artist’s Instagram accounts :

Palao Market Fest is an atypical market/festival, which takes place every first weekend of the month. It’s an atypical and modern concept that the organisers offer us: it’s not just a simple craft market with different food trucks, but a real dynamic festival mixing different arts, so you can live a real experience. During the month of November, the organisers have decided to add a date on the weekend of 20 and 21 December for the “Cool Christmas Fest” to get us into the Christmas spirit.

Far from the traditional markets that can be found in Barcelona such as the Boqueria or Saint Antoni, this market offers you the possibility of making artistic discoveries. Between jewellery, cosmetics, textiles or decoration, you are bound to find something you like. All the exhibitors are real craftsmen, and will make you discover their product with passion.

In addition to the exhibitors, you will also be able to find many Food Trucks of all kinds to eat, or simply to test! All types of cuisine will be present: Vietnamese, vegetarian, burger, pastry … The hardest thing will be to choose!

In order to live a real cultural experience and to make this event more dynamic, street concerts will be proposed. You will find the DJ set MIGUELITO SUPERSTAR and DJ set ZONZO on Saturday, and DJ set IVAN IVANOVICH and DJ set BUSA on Sunday. In addition, there will be 5 STREET MUSIC EXPERIENCES to make sure you have an unforgettable time.

The market is therefore present this weekend of 20 and 21 November, but also the first weekend of December, Saturday 4 and Sunday 5 December 2021. Two time slots are available: from 12:00 to 17:00 or from 17:30 to 22:00. These times offer more opportunities to visit, but also two different atmospheres: one during the day and one at night. There is bound to be one that suits you!

The entrance fee is 5€, and it is recommended to book your place in advance on their website (https://palomarketfest.com/es/home), in order to be sure to have a place.

Cyclists from all over the world draw amazing figures through their GPS for sharing them later. It is called Strava art.

Other times, we have talked about mobile applications such as Strava or Endomondo which, in addition to being good tools for keeping us fit with our bicycle, are new social networks where we can share routes, record times which make us feel pride, among other impressions. But the thing that their inventors maybe never imagined when they programmed them is the fact that the users are taking an artistic advantage of them when they use the routes marked on the streets where they move around.

Such as the expression “mente sana in corpore sano” predicts, there is a very narrow relationship between the wealth of our minds and the training of our bodies.

In this sense, we want to make reference to this (we think that it can be already called like this) “movement” which, taking advantage of the digital applications, has transformed the cities into a big canvas. 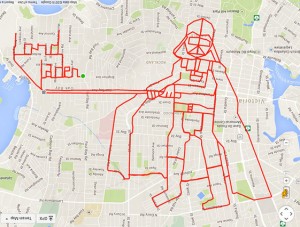 Cyclists of everywhere in the world plan and prepare a route which ends up in images (some of them really complex figures), which will finally be shared with friends and, even, with the rest of the world.

If you are thinking about a new challenge, this is the best way to combine sport, art and new technologies.